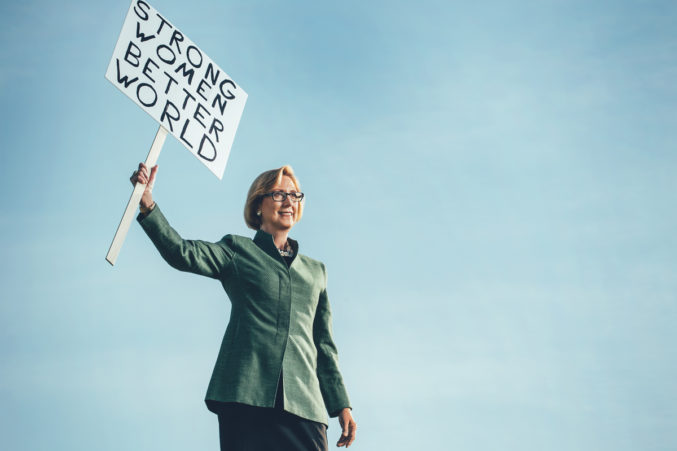 DALLAS (May 13, 2021) -- Texas Women’s Foundation, one of the largest women's funds in the world, announced today that President and CEO Roslyn Dawson Thompson will retire from the organization at the end of 2021. Dawson Thompson, who has held the position for 10 years, will remain active in the role until her successor is named. Texas Women’s Foundation is initiating a nationwide search as part of the organization’s succession plan.

“I want to thank Ros for her enduring dedication to our mission and for her guidance and friendship during the past 10 years. Ros is a force of nature whose visionary leadership marshaled Texas Women’s Foundation through the most transformative decade in our history, and whose influence has made an indelible impact on the lives of generations of Texas women, girls and families,” said Shonn Brown, chair, Board of Directors, Texas Women’s Foundation. “We are filled with gratitude for what she has helped Texas Women’s Foundation accomplish, including securing our position as one of the largest and most respected women’s foundations in the world – in assets, impact, diversity and size.”

In addition, Dawson Thompson’s commitment to advancing women is reflected in the women’s leadership programs created by Texas Women’s Foundation that have elevated, celebrated and supported women leaders from the grassroots to the C-suite and halls of state. Dawson Thompson also helped Texas Women’s Foundation focus its grantmaking on innovative initiatives in child care, health care and housing stability, impacting thousands of women and families, while continuing to fund gaps in community-based services for women and girls. During Dawson Thompson’s tenure, in addition to growing its grantmaking by more than 180% and its assets by more than 40%, Texas Women’s Foundation also became the first women’s foundation to invest 100% of its assets in a 100% mission-aligned gendered impact portfolio that delivers strong financial returns and social benefits to women and girls.

“Ten years ago, I was granted an extraordinary privilege to lead and work full-time for, and with, the finest and most dedicated Board, staff, volunteers, donors, program partners and grantees, all committed to the same values and goals: to advance gender and racial equity, and to ensure equal opportunities for all Texas women and girls,” said Dawson Thompson. “These are the strengths that sustain Texas Women’s Foundation – and they will carry the Foundation forward into the future, where our mission, our work and our impact are needed more than ever, to build equitable communities where all women and girls can reach their full potential and all Texans will benefit.

Dawson Thompson is an experienced business leader and fundraiser, as well as a dedicated community volunteer and philanthropist. In addition to her role with Texas Women’s Foundation, she serves on the board of Tides, a global charity focused on shared prosperity and social justice, and is a former board member of the Women’s Funding Network, the global association of women’s foundations, where she also served as board chair from 2015 to 2017. Locally, Dawson Thompson is on the boards of the Dallas Regional Chamber, the Dallas Chapter of International Women’s Forum, Dallas Medical Resource and the SMU Tate Lecture Series. She is also a member of the Advisory Boards of the Junior League of Dallas, the Dallas Mavericks and the Jane Nelson Institute for Women’s Leadership at Texas Woman’s University.

The impact of Dawson Thompson’s work has been widely recognized, earning numerous awards and honors and contributing to a lasting legacy. She was recently awarded the 2020 Liberty Bell Award by Dallas Association of Young Lawyers and was the 2019 recipient of the Women of Distinction Award by Girl Scouts of Northeast Texas. Dawson Thompson was recipient of the 2018 Texas Governor’s Commission for Women Texas Women Economic Empowerment Award, as well as the 2018 ATHENA Award presented by the Dallas Regional Chamber; the 2018 Global Goals, Local Leader Award by the United Nations Association – USA; and the 2018 Dallas Power 50 Award by the Texas Diversity Council. Previous honors include the Dallas Business Journal’s Women in Business Award (2014) and the Maura Women Helping Women Award (2009). For five years, Dawson Thompson has been included in D CEO’s Dallas 500, which lists the most influential business, government and nonprofit leaders in North Texas.

Prior to joining Texas Women’s Foundation as CEO, Dawson Thompson had a successful 25-year career leading national marketing firm Dawson+Murray+Teague. She is a graduate of Baylor University (BA) and Vanderbilt University (MA). Dawson Thompson is married to Rex Thompson, retired professor of finance at SMU’s Cox School of Business, and their family includes three adult children.

Texas Women’s Foundation is Transforming Texas for Women and Girls, empowering them to build stronger, more equitable communities. One of the world’s largest women’s foundations, the Foundation raises funding from a broad base of donors, including individuals, foundations and corporations. These resources support more than $7 million in investments that advance economic security and leadership for Texas women and girls through groundbreaking research, advocacy, grants and programs. Since inception in 1985, the Foundation has invested $57 million in women and girls, including $43 million since 2011. The Foundation’s statewide research on issues affecting women and girls provides decision-makers and lawmakers with critical data to inform policies, practices and programs in the state. Its advocacy, grantmaking and innovative programs support solutions that help Texas women and girls thrive. In addition, Texas Women’s Foundation is an acknowledged leader and advocate in the gender lens investing movement and has deployed 100 percent of its assets – endowments, operating investments and donor-advised funds – in a gendered impact portfolio that yields strong financial returns and social benefits to women and girls. For more information, visit www.txwf.org, Facebook, Twitter, LinkedIn or Instagram or donate now