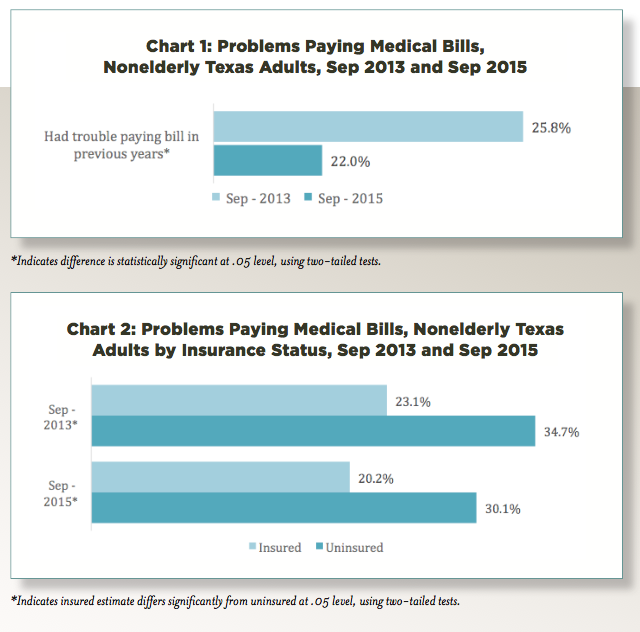 When it comes to skipping health care services because of cost, the report found uninsured Texans are more likely to skip all services (primary care, specialist care, prescription drugs, etc.) than those with insurance. However, researchers discovered fewer uninsured Texans said they skipped getting care in 2015 compared to 2013.

“On the whole, uninsured Texans reported fewer problems with affording health care in 2015,” said Elena Marks, EHF’s president and CEO, and a nonresident health policy fellow at the Baker Institute.  “While our data doesn’t explain exactly why that is happening, the Texas economy improved during that time which might have helped the uninsured pay for care.”

In addition, Marks said because the number of insured patients increased across the state, more charitable care may have been available to the uninsured. New 1115 Medicaid waiver projects across Texas also may have enabled more uninsured adults to access affordable health services, Marks said.
Researchers found those with the lowest incomes were much more likely to say they skipped getting primary care, prescription drugs and dental care than those with higher incomes.

The report shows all groups reported dental care was the most likely health service they skipped because of cost.

“The connection between oral health and overall health is well documented, yet we often regard dental care as ‘extra’ rather than essential,” Marks said. “Most plans, including in the ACA Marketplace, offer dental care coverage as only an ‘add on.’”

The report is the 17th in a series on the implementation of the ACA in Texas co-authored by Marks and Ho.

The Health Reform Monitoring Survey (HRMS) is a quarterly survey of adults ages 18-64 that began in 2013. This report is a summary of data extracted from the HRMS surveys in Texas administered between September 2013 and September 2015.

The HRMS is designed to provide timely information on implementation issues under the ACA and to document changes in health-insurance coverage and related health outcomes. The Baker Institute and EHF are partnering to fund and report on key factors about Texans obtained from an expanded, representative sample of Texas residents (HRMS-Texas).